The Start of Another Trip - House Peeping

We stocked and packed up our things, hopped in Kiki and headed out again on June 16. This would be our longest trip to date. All total, we drove around 4,000 miles! Can you believe it? When we got home I was exhausted! But what a great time we had. Follow along with me if you'd like.

Here's the house where we lived and I was glad to see it looked good. It's been almost 20 years, y'all! This neighborhood was called Woodway.

Where that SUV is parked, is where my children took turns parking their cars.

The skies where so pretty with the puffy clouds and I couldn't resist a snap.

We drove through Waxahachie, Texas, looking for an RV campground. We never found one but I was loving the pretty little houses and decided I'd do some 'drive by snapping'. So sit back and relax as we see as we go House Peeping!

I know this wasn't a very RVie post but I just love seeing pretty old houses and I think most of you do too.
Come on back and we'll continue our trip.

We had planned to attend a show while in Branson and went to see Mickey Gilley. Now you probably are saying, "Mickey Gilley! Why?" Well, sit on down and I'll tell you a little story.

As you can see, Chloe Dawn has already heard this story and is taking a cat nap or I guess it's a dog nap.

Okie dokie, about 10 years ago, George, my hubby was on a business trip. He was flying home on Southwest Airlines and sat down by a guy on the plane and he was telling me how nice he was and he just talked the entire trip and that the guy had a night club in Houston and was wearing a really sparkly pendant around his neck. Then George asked me had I ever heard of Mickey Gilley and I said yes. Well, that was who he was sitting by and George didn't have a clue about who he was. So I had to explain that Mickey Gilley was cousins to Jerry Lee Lewis and Jimmy Swaggart, that he played the piano and sang and owned the famous Gilley's nightclub that burned down in Pasadena, right outside of Houston. I amaze myself sometimes at all of the trivia stuff I know. Also, Gilley's was featured in the movie "Urban Cowboy" with John Travolta and Debra Winger - Bud and Sissy. That was a cute movie.

So that is the reason we went to see Mickey Gilley. But first we needed a bit of nourishment befor the show. We thought Mickey's little cafe would do the trick.

It was a cute place although that waitress doesn't look so happy.

This guy was singing to the eaters and he was cute and posed for me as I snapped his picture. I hate to be negative, but he wasn't really that good but don't tell anyone I said that.

Nope, I didn't ride the bull!

George looking all cute and stuff and ready for the grilled salmon he ordered.

I'm waiting too for my food, a salad. No, no, my head's not shaved or anything - I just have my hair pulled back. I'm still trying to grow it out. I've worn it short for so long that I just can't stand it hanging down so up it goes.
I won't go into all of the hoopla, but the food here was just awful! Really it was. George had ordered salmon and the waitress brought him a chicken fried steak. He's easy and said he'd eat it - he could hardly cut it. She came back by and said here is your salmon - it was raw! Well, the little waitress was really sweet and apologized, but I guess Mickey's restaurant has seen better days. We hoped this wasn't a prelude to Mickey's show!

The theater was just next door so we walked on over. 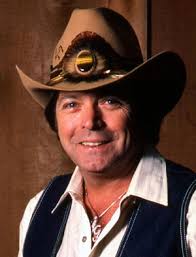 This is how I remembered Mickey Gilley - he was a good looking guy and he could really play that piano and sing!
This is how he looks today.

Poor thing had fallen about a year or so ago and hurt himself badly and couldn't play the piano anymore and then recently he fell and hurt his foot and was in a wheelchair. But guess what? He could sing almost as well as when he was younger and his show was great! I'm so glad we got to see him.

After the show we headed over to Andy's for some frozen custard! Yummy and what a way to end the evening. We ate our frozen treats and walked on back to the RV park. I was a little scared because it was so dark but George was my protector and there really was no danger.

So that's our stay in Branson. I do believe Branson is going downhill though. So many places were closed or boarded up. I guess it's heyday is over but we enjoyed ourselves so much and it was as hot as it is in Texas! Heck, I was ready for some cooler weather but the first of June was so hot!

We settled down for a couple of nights here at Branson's Shenanigans RV Park.This park was cut out from the Ozark mountains and we felt as though we were out in the forest although we were only about 3 blocks from the happenings in Branson.

If you get the chance to come to Branson and need an RV park - honey, this is the one!

The grounds were very lovely and this was a little sweet garden dedicated to a little lady who had passed on.

The hostas! I love hostas!

Isn't this cute how they have the spaces numbered?

Kiki in space #28 and all settled in.

George seems to always be resting, doesn't he? Really he does the hard work of hooking Kiki up and my job is getting the insides ready, when the AC is turned on, of course. Yep, that's a straw beach mat you see. We use it as our little mat before we step into Kiki. We just roll it up when we get ready to leave. We're real fancy like that ya know! ;)

Cooking out is going well with our new little grill we bought from Buc-ee's!

Each space had a cute little lamp post accented with flowers. Don't worry, they won't wilt - they're fake! :)

This is the office and it was as cute as the rest of the park. The owners were just so nice and seemed like your next door neighbors.

A very welcoming entrance with flowers and cuties. See the little bunny peeping through green leaves?

Around the other side of the porch were the bathrooms, showers and laundry.

Sorry for the blurry because I was trying to catch up with Chloe Dawn as she was walking so fast discovering her new place. She just loves sniffing and checking out the area.

We were staying up on the hill and this was another area of the campgrounds down the hill. See how beautiful it was?

Just in case I were to get lost, these little signs should help me. Well, this was a very nice and clean place and close to the happenings in Branson. We took our bikes and thought we could ride them downtown, but it was just too hilly. But we did walk the few blocks and it was fine.
This was a Good Sam's park and we payed $70 for two nights. Loved this place and if ever in Branson again, we'll stay here again.

Next post I'll take you along with us to the show we attended.

Our destination for this trip was to get to Branson. We had always wanted to go and neither or us had ever been to Missouri - another beautiful state.

We arrived and took a little tour around town before we headed to our RV campgrounds.

We didn't know what to expect and we were just delighted.

You know me and Roosters! He was a bigun!!

Next post I'll show you where we stayed while in Branson.

Note Songs - pop over for a visit